This post ought to really be called Holiday Hats, because that is what I knit and knit and knit for 6 weeks straight leading up to the gift-giving days.  And knitting 6 hats in 6 weeks is a little, um, tedious…at least for me.  But the end result was worth it for everyone likes their hats, arriving just in time for the cold, snowy winter we are having here.  Warm noggins makes for happy loved ones!

And without further ado…the holiday hats… 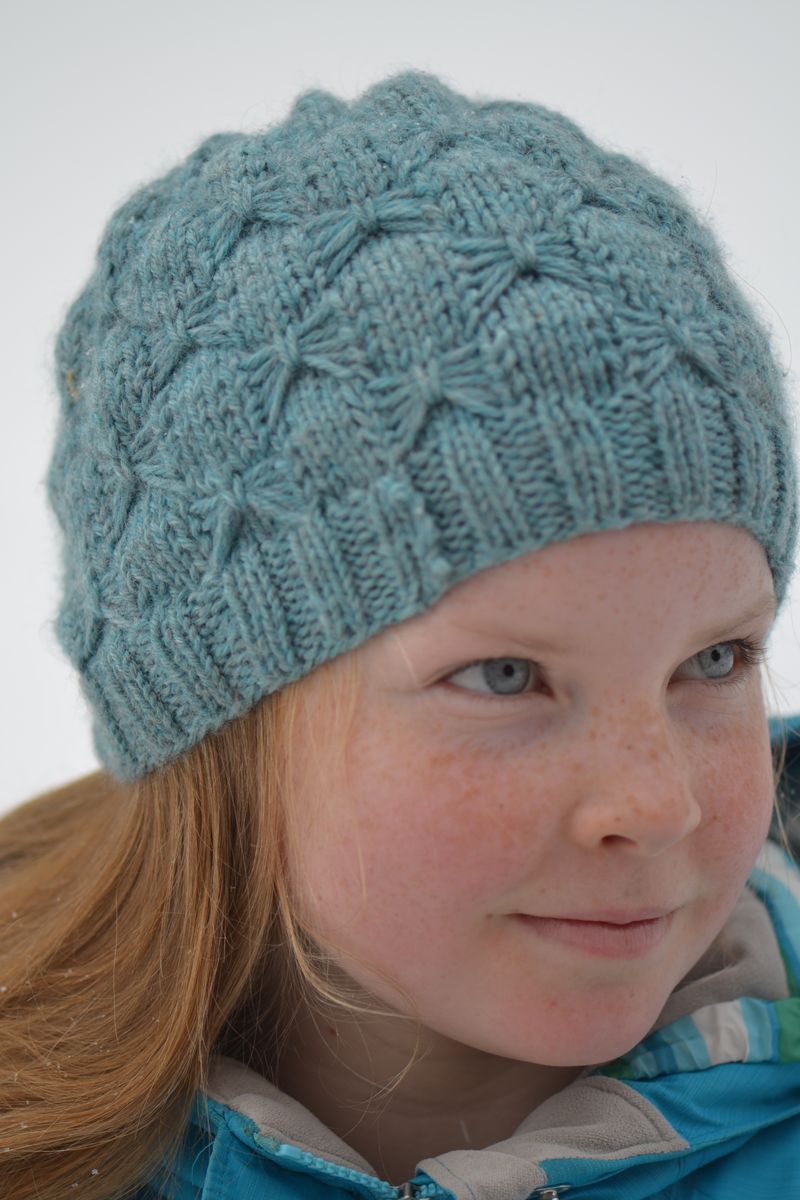 another Butterfly Hat for my sister-in-law 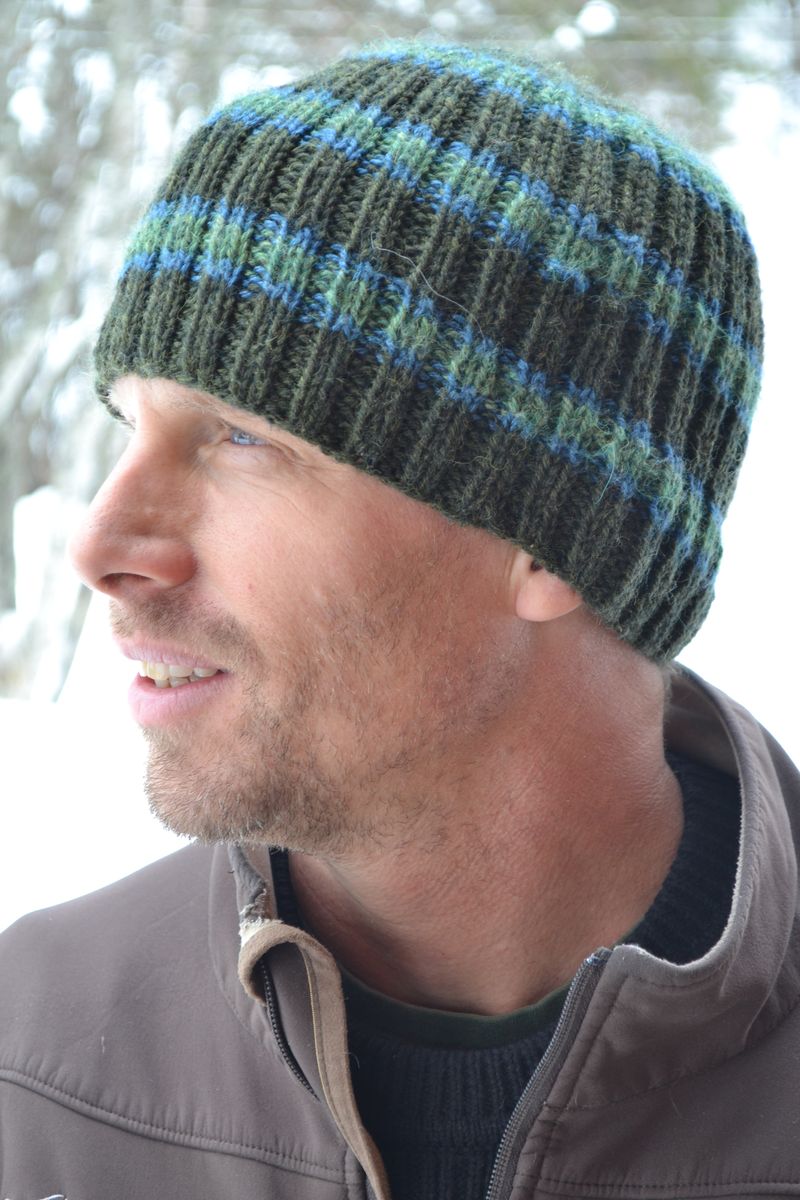 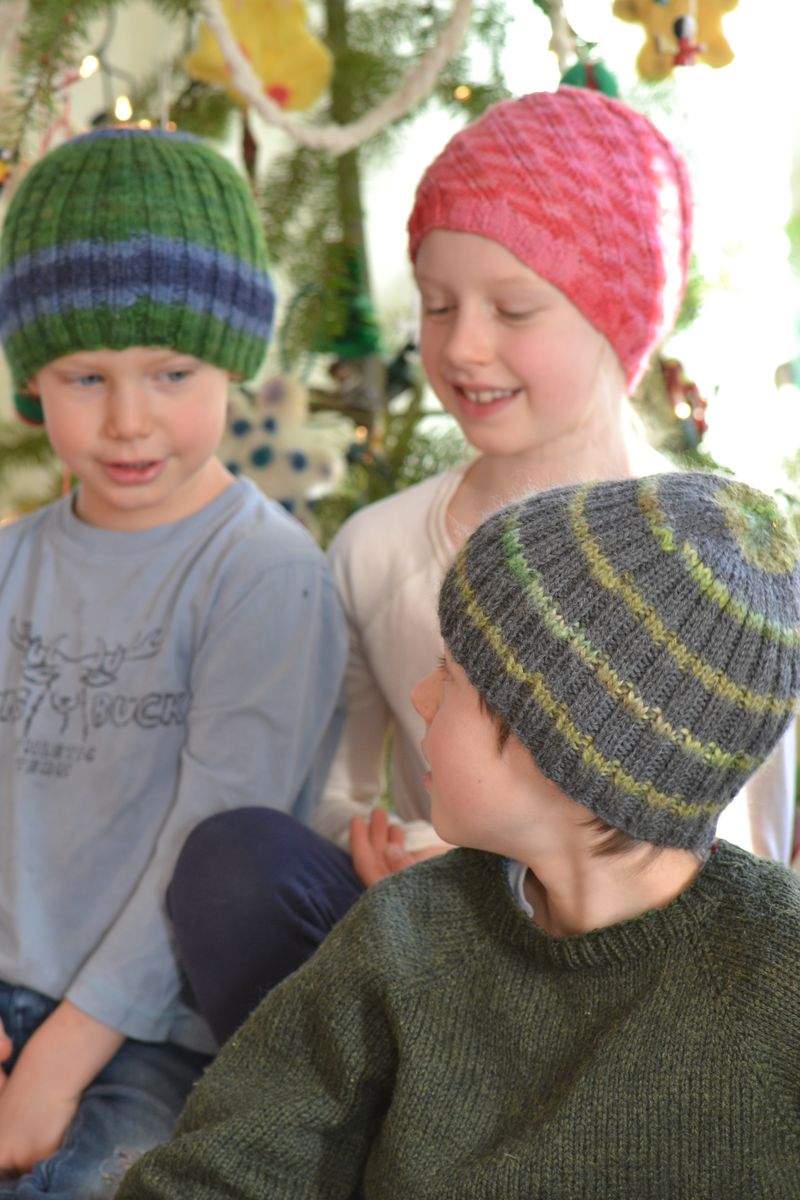 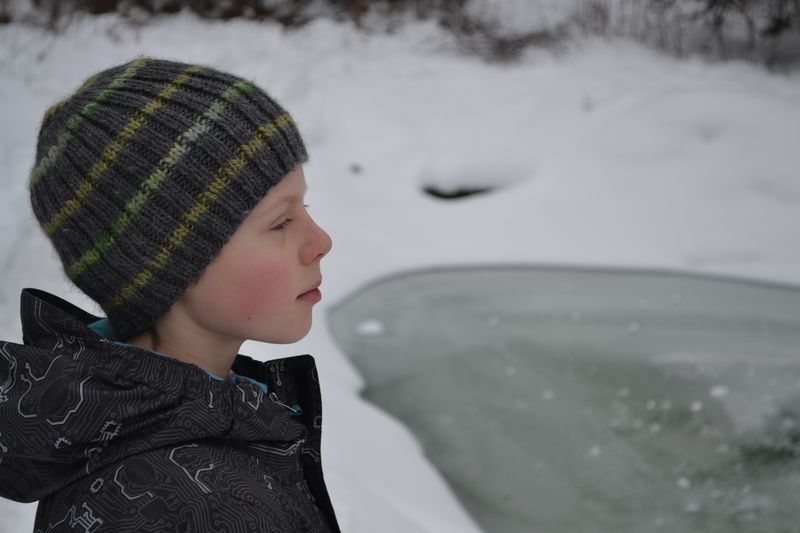 Forrest was very particular about his choice of yarns…he spent a good while sorting through my stash for the right greens and greys. 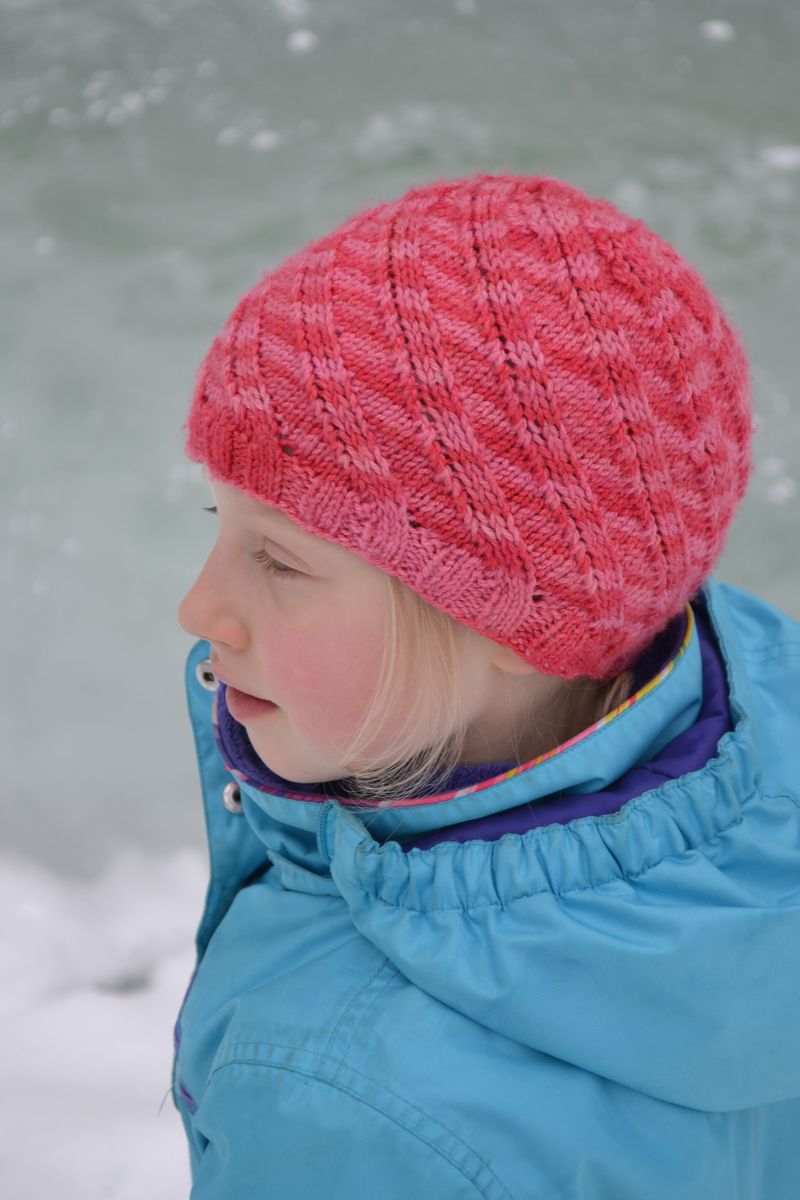 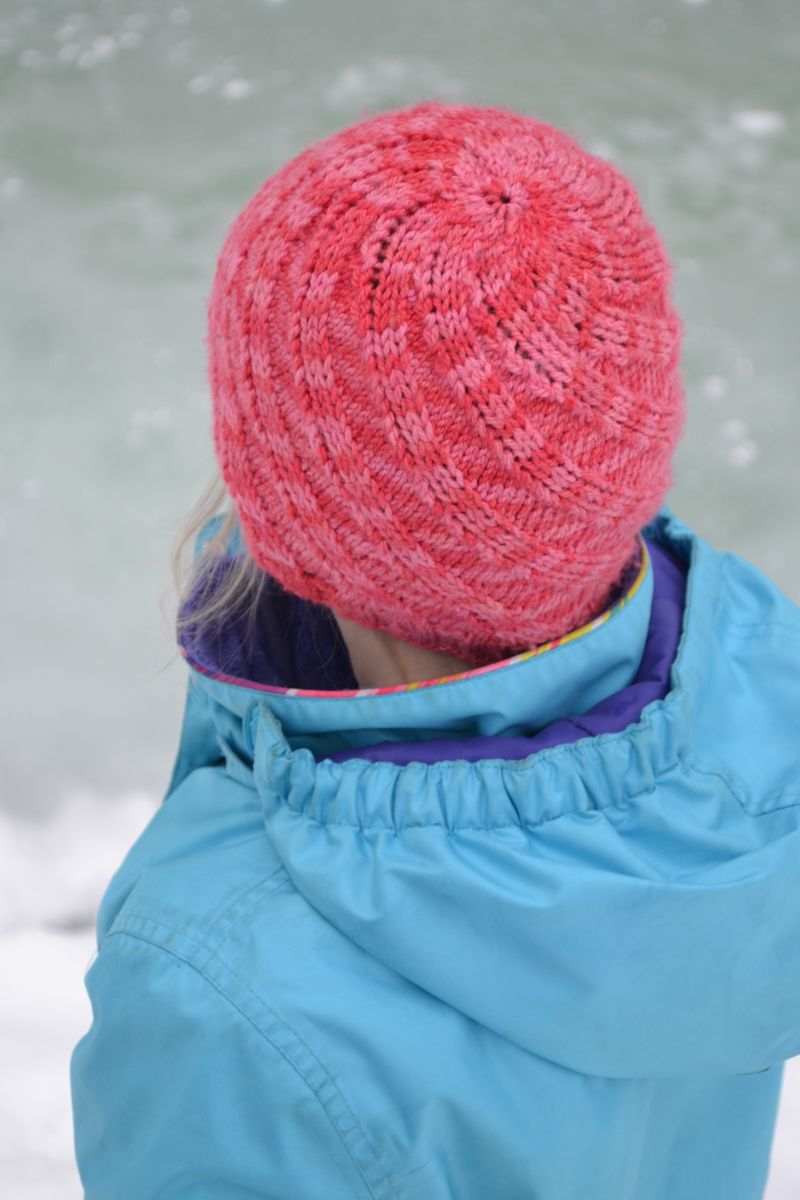 Sunshine loves her surprise Odessa Hat…in a shade I wasn’t expecting to come out so bright!  Good thing my girl loves it! Huckley loved his Ribby Soule hat, but sadly, I made it with some stash yarn that turned out to have a lot of alpaca fibre in it.  The hat stretched out to sit like a loose helmut on his little head, and has since been appropriated by his papa.

These hats were a great way to stash bust a few old skeins of yarn, leaving a little room in the bin to fill with some new yarn.  The Ribby hats really lend themselves to this as you can create various stripes from an assortment of odds n’ ends.

I can’t help but exhale a little now that my hat making marathon is over, though, truth be told, there is one last hat on the needles yet!  More on that next week! 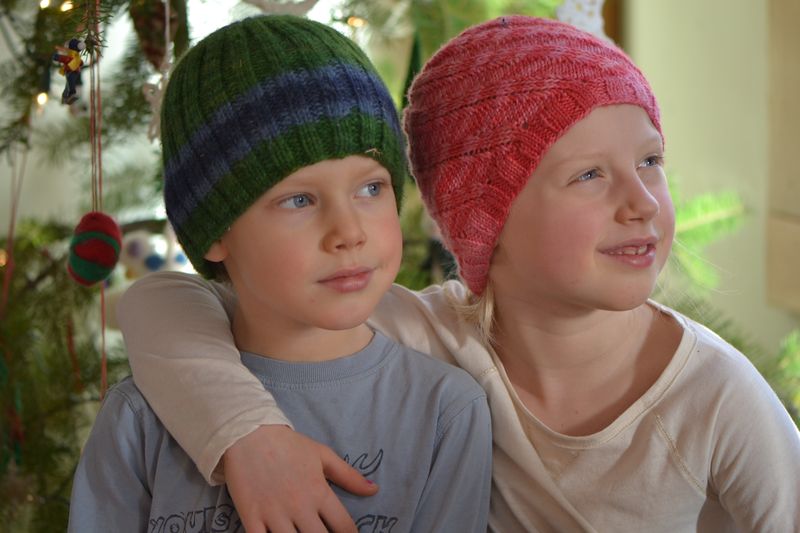 Beautiful hats! Every one. Though they are all wonderful, since you mentioned that Forrest carefully chose the colors for his (from stash yarn, no less), I really want to comment on how perfectly the colors go together. Great job. I couldn’t pick a favorite one, though, as they are all so terrific.

You did a great job on all the hats! I’ve been wanting to knit up the butterfly one for quite some time. You may have provided me with just the right amount of inspiration :).
Visiting from Ginny’s Yarn Along.
Blessings on your week,
Kelli

they are all so wonderful! great job and fast knitting!

Thanks, Becki! I will pass it on to Forrest…he is a wonderful artist by his own right and he indeed has amazing colour appreciation.
xo Jules

Hi Kelli…The butterfly is a great pattern, and quite easy. I’ve knit a handful of these and they go swiftly, on account of passing the stitches over so many times. Once you get the rhythm, it flies!
xo Jules

Thanks, Jeannette. I think I’m finished knitting hats for a good long while. Oh wait, there is one more to cast off today!
xo Jules

Hey friend!
Can I come play with you all sometime, well me and my little buddies of course!
(wish we lived closer, I’m down coast into another country from you all:))
Glad to catch up on you and yours fun having and creating, y’all are awesome! Thanks for the words, you have a way with them;)
you and melanie hold a special place in my heart for all you’ve unknowingly done for my heart and soul. sending love and laughter- R

Love these and your winter post! Your header is just beautiful too, Jules. It would be such a dream to make our way out there some day.

Hi Robin!!!! Thanks so much for your kind words…they made my day! Wishing you a wonderful 2016! Stay in touch!
xo Jules

Thank you so much, Tonya. That means a lot to me. And if you ever do a road trip, you have a place to stay!
xo Jules