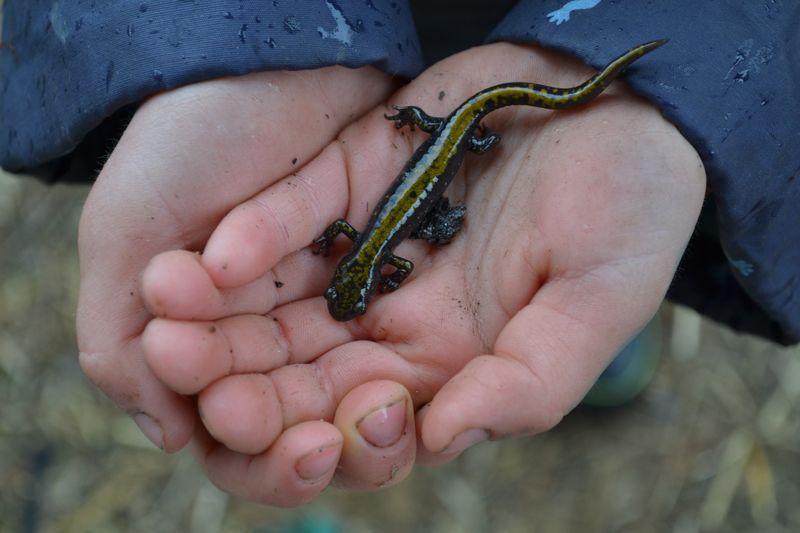 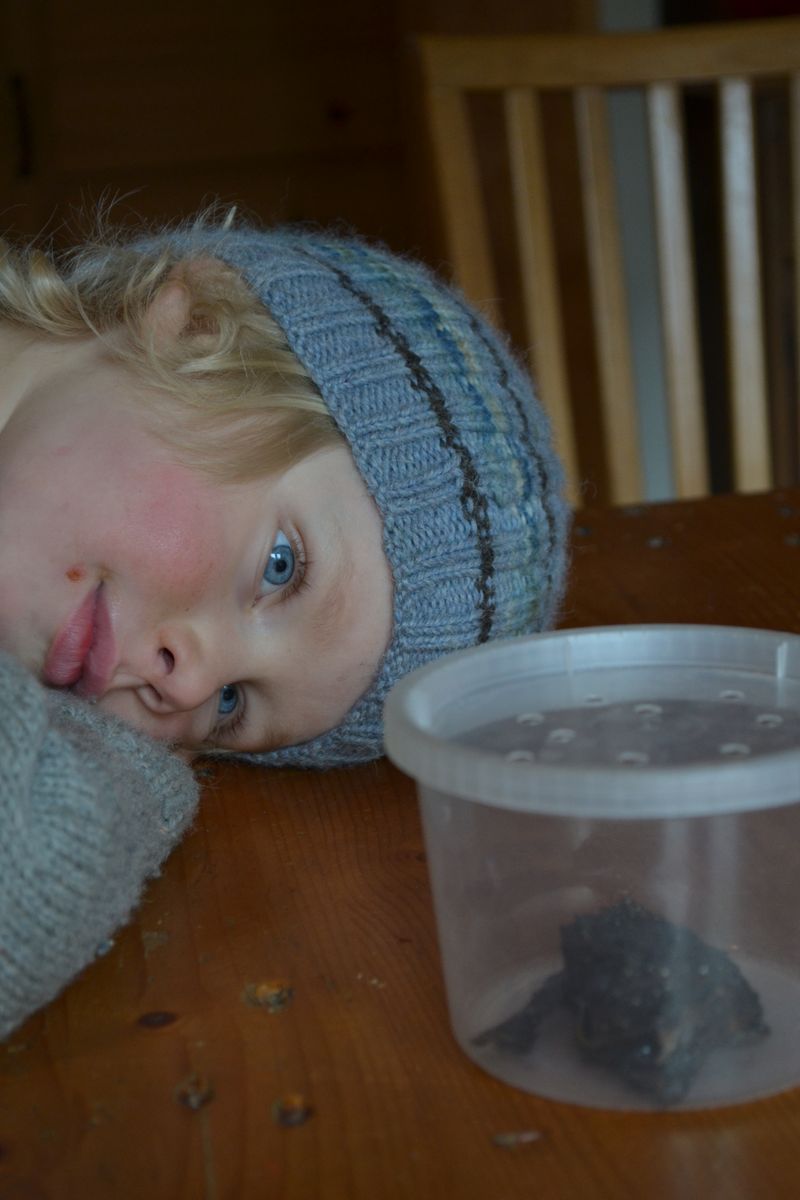 We found Lenny the lizard resting (hiding?) beneath a scrap of bark in the big garden.  Huckley immediately was smitten.  Unlike most other times, I agreed Lenny could temporarily reside in a container until the big brother returned home.  Little did I know how fond Huckley would become of this slithery, glistening reptile.

When Forrest walked in the door, before he could take off his jacket, Huckley proudly thrust the container towards his favourite person.  “He’s a lizard and I am calling him Lenny and he is mine.”  And in that single sentence, Huckley’s entire four year old world was summed up with his assertion that he was important and best be reckoned with.

Despite my best intentions, Lenny crawled all over the arms and necks and even faces of Huckley and Forrest while I made dinner.  Finally, as agreed, and more than encouraged by me, the two tromped back down to where Lenny came from.  I watched Huckley carry himself with reluctant dread.  This was so heavy on his four year old heart.

Moments later, the door was shoved open and I heard the wailing voice of my youngest from the entryway, “Mama!!!  I can’t do it!  I can’t let my lizard go…it makes me feel so sad!”

I must tell you, we like animals here…we have two cats, three dogs, four sheep, eighteen chickens and six pigs soon arriving, not to mention two mystery friends (as you shall see down below).  But we do not do caged animals well.  Perhaps one day we will consider it, but for now, we like our critters to roam.

Unless they are slimy and slithery and move as quickly as a leaping lizard.

However, concessions can be made.  And so we kept poor Lenny overnight, slightly moistened and not wanting for much.

The next morning, he was carefully toted about in his sanctuary, with murmurs of adoration and respect detailing everything Huckley did.  But before lunch, he was momentarily left on a tree stump outdoors and leapt away before anyone noticed.  Huckley smiled quietly, “It was time for him to go home, mama.”

Without someone telling him when or how to do it, my four year old easily recognized the obvious and let him go with peace in his heart and a smile on his face.

And this mama was humbled by the simplicity of it all. 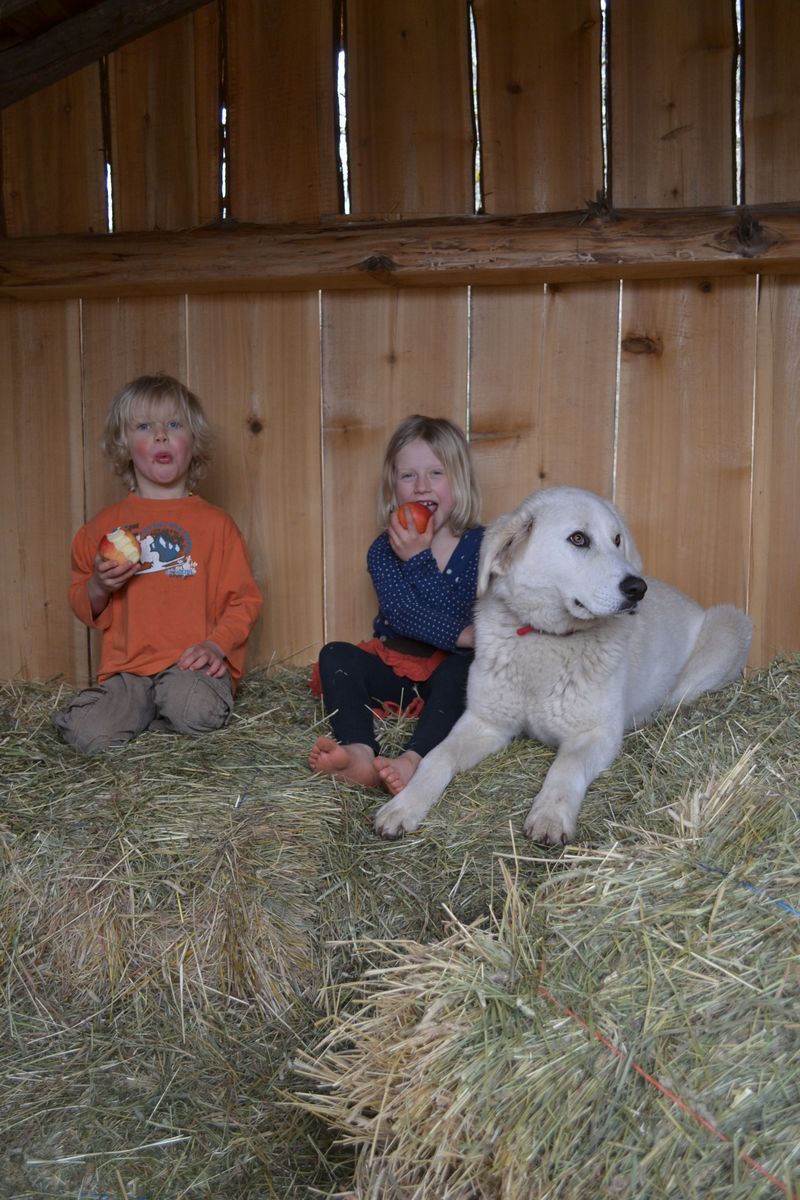 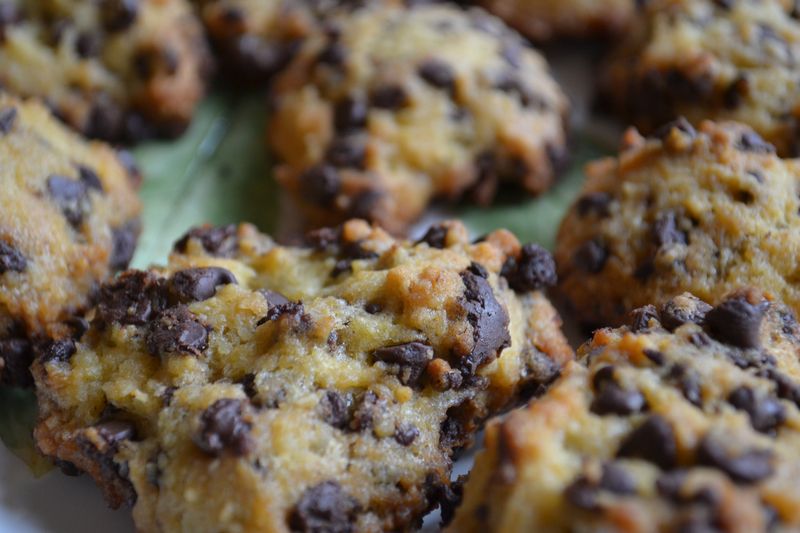 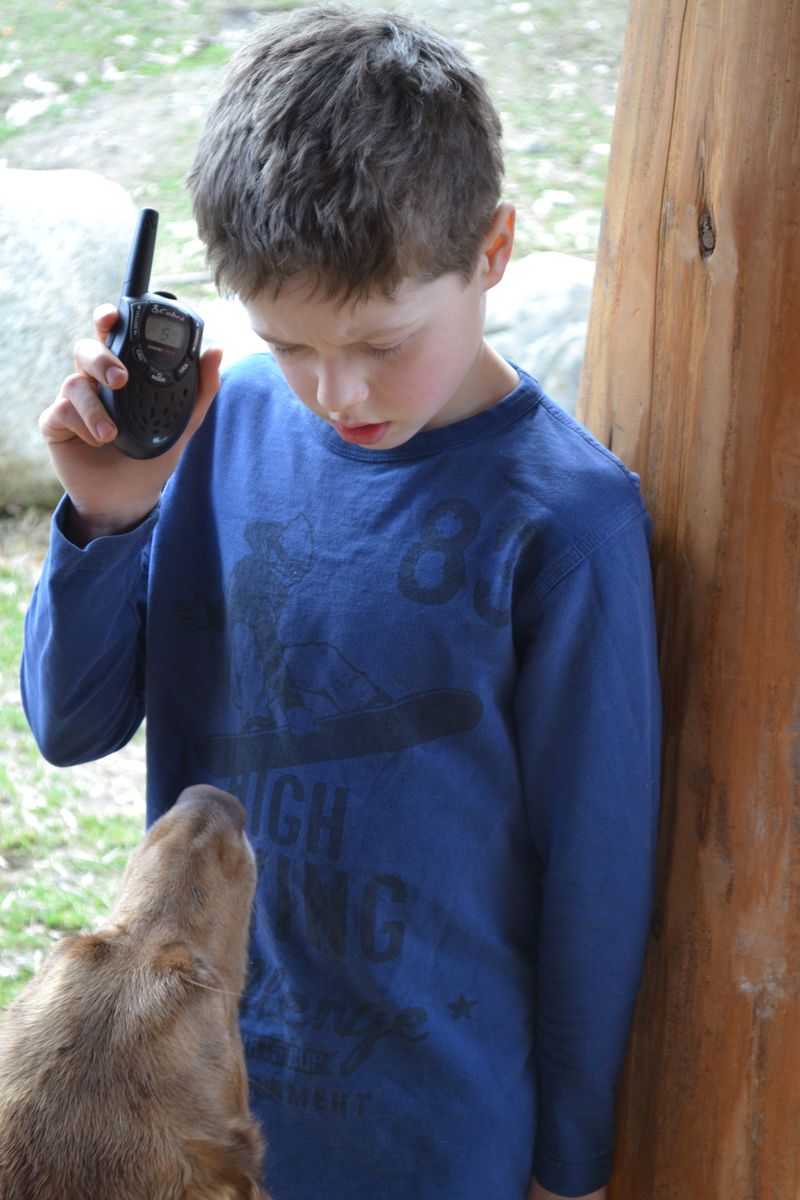 On a day off, my husband found some old walkie talkies in his shop.  Three, to be exact.  The kids were over the moon excited and tromped about our acreage using all sorts of hilarious slang, in overly deep voices…I don’t even think they noticed how deeply they were speaking.  At one point, Sunshine turned the channel and heard two other kid’s voices, crackling away ~ weren’t we all surprised it was some good homeschooling friends across the valley and up a mountain!  What are the chances?!  Between crazy giggles, these five kids had an outrageously good time trying to come up with code names, disguised plans and assorted reasons for staying on the radios.

We began eating lower carb meals for our family, in hopes of getting better control over my daughter’s blood sugar levels.  I made a batch of chocolate chip cookies made without flour or sugar.  Um, yes, they taste great…if you like “hippie pucks” as my husband calls them.  Forrest had his best friend over and they were eager to sample the treats.  After one bite, our friend paused and hesitantly asked, “Uh, Jules, is there goat in these cookies?”  Why yes, there was goat cream cheese, actually.  “Oh, well, I don’t want it anymore.”

Good thing my three kids like goat milk and related products, because look who is coming home to us in six weeks… 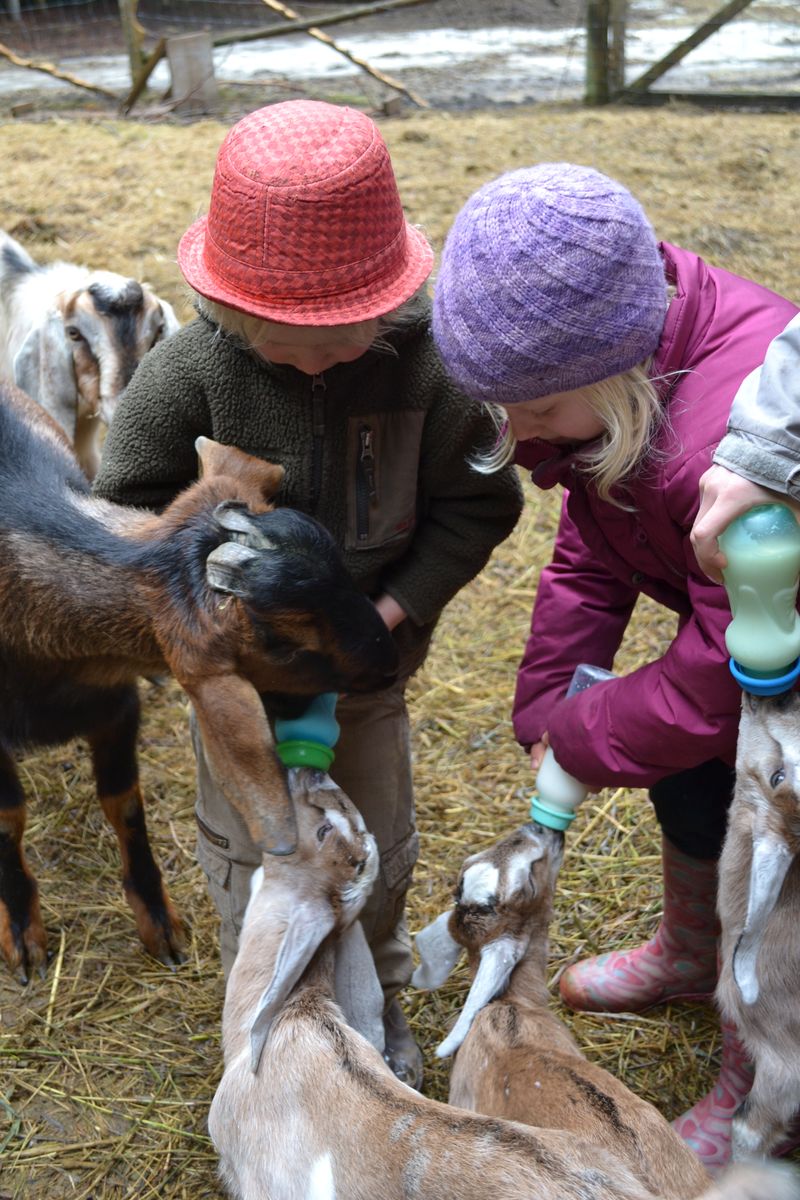 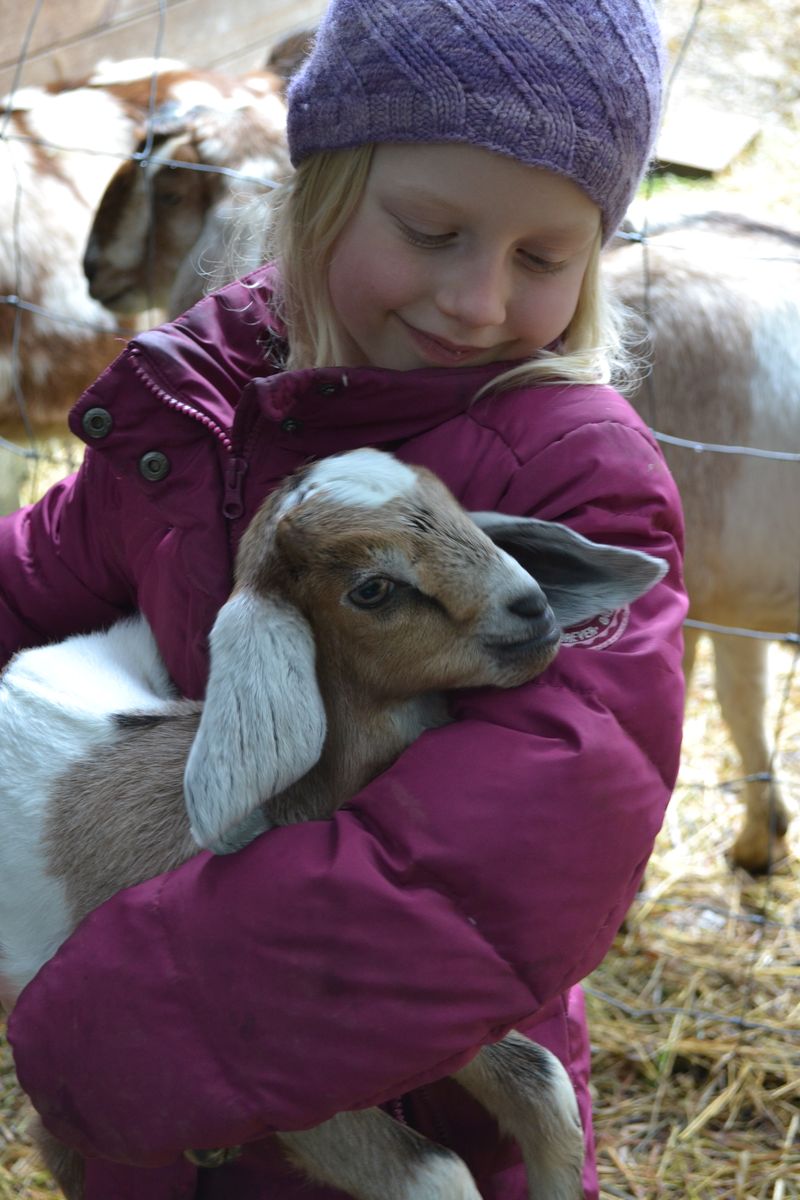 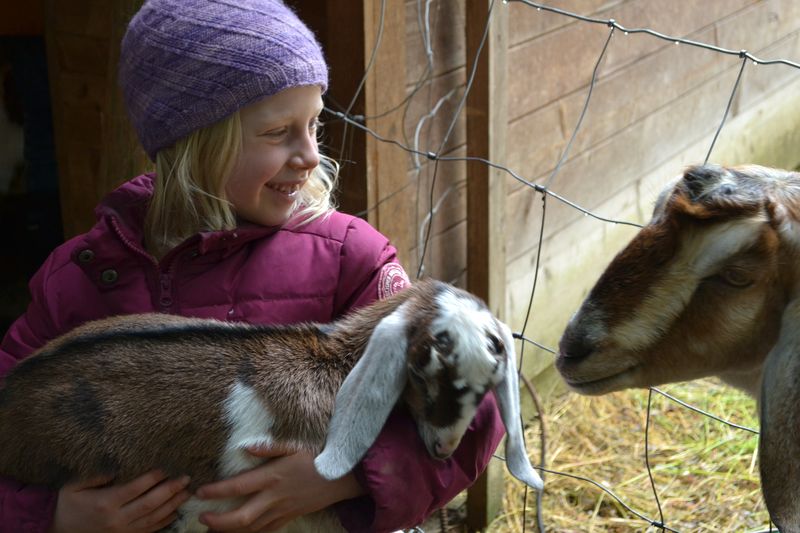 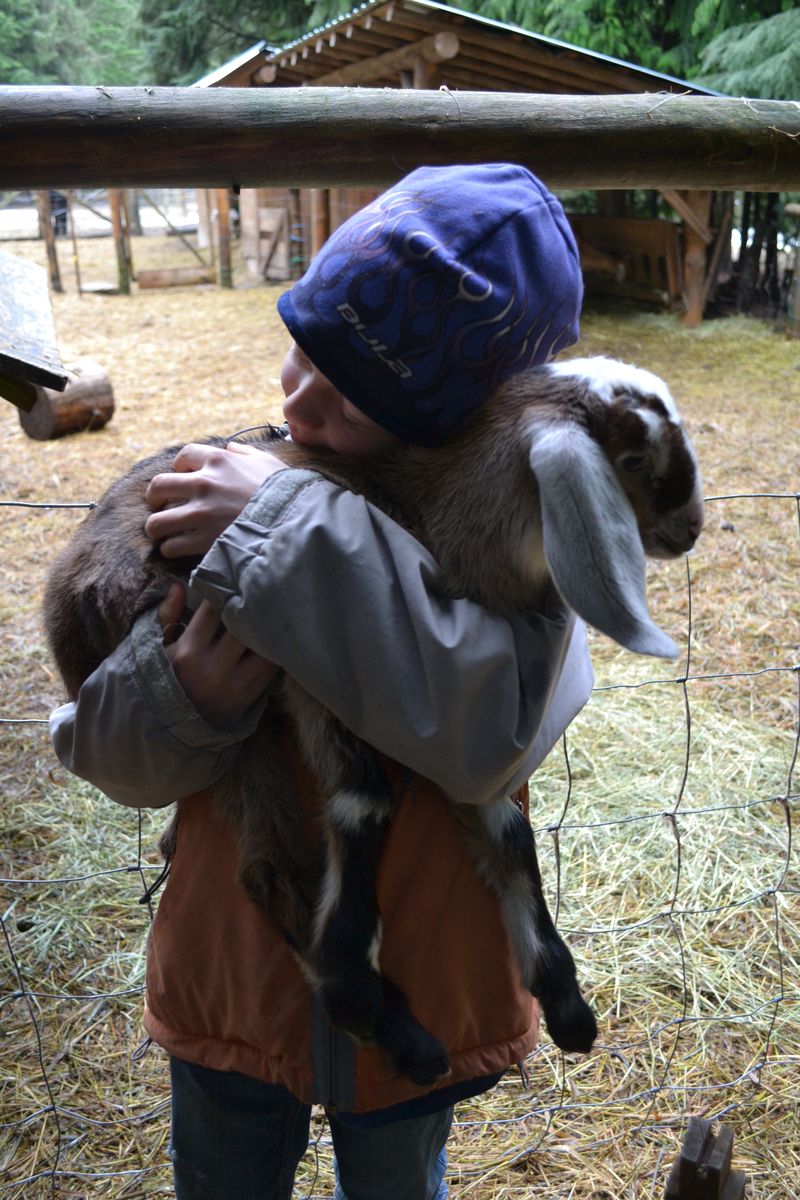 She will be accompanied by a friend, Billy the Kid.  The pair will join our flock of sheep until we clear pasture for them by the fall.  Heidi will be giving us milk this time next year, so we will have a whole year to get used to each other.  We can hardly wait!

In the meantime, spring has sprung and there are worms and snails and caterpillars to fondle…and maybe another lizard or two. 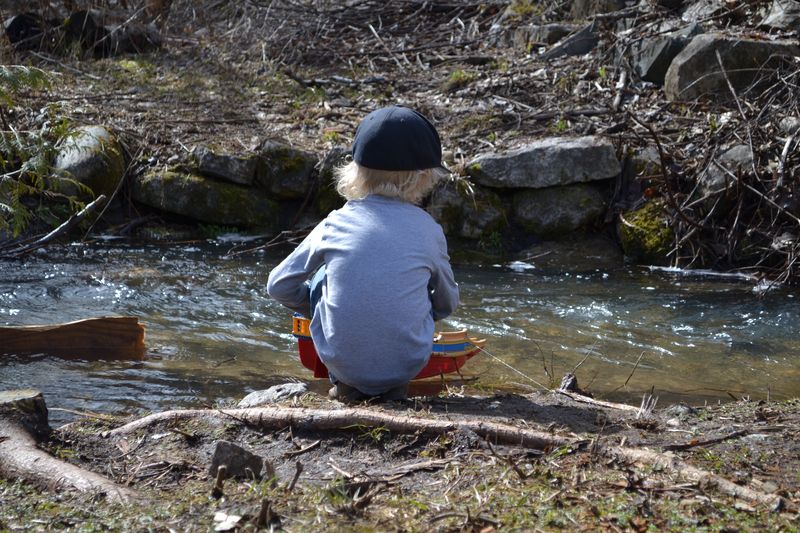 My, what adventures you’ve been having! Heidi is just the sweetest little thing, although I can’t say the same for that lizard! What a thoughtful and kind-hearted little boy you have though. Your homestead seems to be literally just bursting with life this spring. A busy summer on the way! Tea and “hippie pucks” anyone? I think they look pretty tasty. Take care of yourself, too, and enjoy it all.

Oh wow Jules -how wonderful – we just love keeping goats although as far as milk goes, we did it all wrong with our goats – we just got two girls to start and I thought I could figure out a way to get a buck and it never happened – we did buy a nigerian dwarf buck – and we love him dearly – but he hasn’t done his job with the big girls so we are now considering a baby girl nigerian for him so we can finally have some milk.
You are forming quite a farm!!

Oh Susan, you always make me smile! Yes, tea and hippie pucks ~ I have a feeling you’d enjoy that immensely. 🙂 Yes, a busy summer is ahead, but we won’t be milking Heidi until this time next year so it really isn’t much more than we are used to…thank goodness.
xo Jules

I’m giggling, Tonya, about how you think you “did it all wrong”. Ahhhhh, this homesteading gig is all about making mistakes, yes? We get it wrong surely the first time and maybe the second time. If by the third time we are still floundering, well then, that’s when we say it is a little hard. 🙂 I hope you surely get some milk soon. If not, come on over (a good long ways) for some of ours, if we manage to do it! xoxoxo
Jules

Leave a Reply to a little crafty nest Cancel reply